Where Does One Start?

You start right where you are. Personally, I was stumbling along and pretty much tripped and fell backwards into the truth. In fact, I was looking the other way, in the direction of my Christian religion. Somebody once called me "a walking King James Version" because I could quote book, chapter, and verse for just about anything I was asked. So how did that work out for me? Well, it didn't work out for me, not at all, because Christianity is not the truth.

Even so, Yahowah mercifully allowed even the likes of me to reach those places He wanted me to find. And He began to unveil before my very eyes the great deception of Paul's religion of Christianity, with its lies about Yahowah's Towrah and about the true work of His Son, His Useful and Beneficial Implement, Yahowsha of Nazareth, the diminished corporeal manifestation of Yahowah Himself. Then He showed me evidence proving that every religion in the world opposes Him and His ways.

His truth has turned my life around and freed me from the bondage of religion and man's political systems.

Yahowah did not give me a unique, personal revelation, nor did He reveal His Truth by means of some mystical out-of-body experience. He showed me His Truth right there in His Teachings (i.e., His Towrah), which includes not only the first 6 books of the criminally mislabeled Old Testament, but all the prophets and writings as well (Do His teachings and instructions not permeate all those books? Well, then, it's all Towrah, or teaching. You see, Towrah does not mean "Law". And because all of Yahowah's Words teach and instruct, everything He left to us is Towrah.). It's there, but it has been hidden, deliberately mistranslated and tampered with by evil men and women throughout the millenia. Nevertheless, Yahowah has lovingly provided to us others who have blazed the translation trail before us, and who have freely shared their discoveries with the world. I say freely because, rather than demanding and receiving payment for their work, they spent their own money to get the truth out to the masses. I took advantage of their research and, as a result, Yahowah allowed the eyes of my understanding to be opened.

He will show you, too, what is true and what is not true. "Let us reason together!" was His invitation to errant Isra'el as recorded in Yahowah Saves / Yahshayah / Isaiah 1:18, and it is His invitation to you right this very minute. He will guide you into all truth. That is why you got to this site today. This is a good place to start your treasure hunt, your earnest digging for the truth. Be ready to get your hands dirty!

A common kneejerk reaction to this unfamiliar message—especially among Christians—is to immediately launch a full-scale ad hominem attack. Let me save you the trouble. I am a nobody and I have no credentials whatsoever. Moreover, my past is absolutely filthy. So don't waste your time going there. Who I am is irrelevant to the evidence being presented, and ad hominem arguments are only used by those who cannot refute the evidence. So let's not even play that silly game, okay? It is suitable for politicians and other liars, not for those of us who are sincerely seeking the truth. 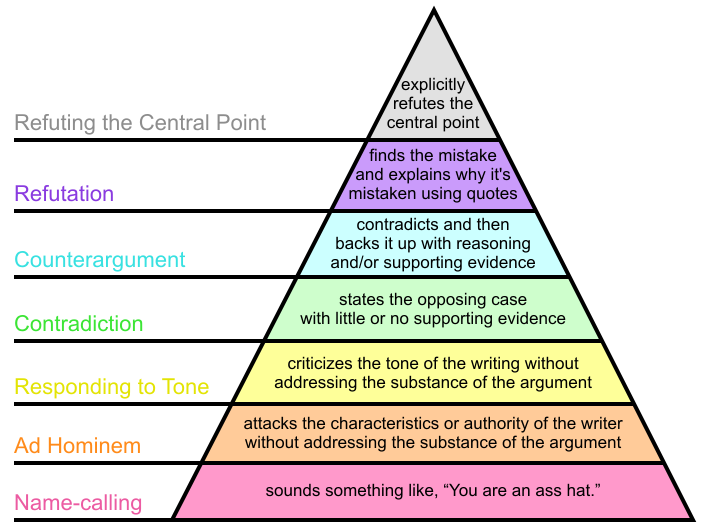 Paul Graham's Hierarchy of Disagreement
lists ad hominem as the second worst type of argument in a disagreement.
The term above Ad Hominem is "Responding to Tone". It is hard to see.
source

Another common ploy is what is called "a straw man argument." In this game, attention is deflected away from the real meat of a matter and is focused instead on something completely irrelevant and, at best, tangentially related. For example: "So you're saying that Mom and Dad are in hell?!" Or, "Well, it's the Christians who are building all the orphanages and helping the poor throughout the world!" Those are examples of straw man arguments. Do not chase the straw man. The answers to those kinds of questions do not provide evidence which refutes what you have already been shown and will be shown in the paragraphs and pages to come. They are straw man arguments, and they are worthless. Steer clear of the straw man argument!  Do not let your brainwashed mind take you there.

Stay focused.
Examine the evidence.
Make use of the resources provided to help you.
Then make a rational decision based on facts
rather than on emotion and superstition.

Knowing a possible answer to a ticklish question will not make you acceptable to your Creator.

Skepticism is actually a good thing in these matters, though. So let me encourage you to throw down your fears and other protective crutches, and let yourself explore freely with your mind. Yahowah created us with the ability to discern, to ponder, to evaluate: He will not take offense when we take courage and carefully and critically scrutinize the things we have been told, holding them up to the searching Light of His Word. Unlike the false envoy Paul, unlike the murdering child rapist and slave trader Muhammad and those who practice Islam, and unlike politicians and religious leaders worldwide, Yahowah has nothing to fear from full exposure. So have at it!  Start living in His Word, and as Yahowsha promised,

Yah is Merciful / Yahowchanan / John 8:31,32
"If you continue in My word, then you are truly disciples of Mine; and you will know the truth, and the truth will make you free."

That is a huge "IF-THEN" statement. The implication is that if we do not continue in Yahowah's Word, then we are not really His students and we will not know the truth, and consequently, we will not be free. Free from what? Good question! The answer is, our steadfast, voluntary continuation in Yahowah's Word guarantees that He will free us from everything that would separate us from Him. Yahowah is our Savior, after all. And if we choose not to bother with a steadfast continuance in His Word, we will remain enslaved to Babylon and to the spiritual death it brings.

So where do you start? You start right here. When? Whenever you decide to get serious and you find yourself unable to wait another minute to get to the truth.

Song / Mizmor / Psalm 19:7
Yahowah's Towrah is complete and entirely perfect, returning and restoring the soul. Yahowah's testimony is trustworthy and reliable, making understanding and obtaining wisdom simple for the open-minded and receptive.

- יהוה) Towrah (torah — teaching, guidance, direction, and instruction) is complete and entirely perfect (tamym — without defect, lacking nothing, correct, genuine, right, helpful, beneficial, and true), returning and restoring (suwb — transforming) the soul (nepesh — consciousness). Yahowah's testimony ('eduwth — restoring and eternal witness) is trustworthy and reliable ('aman — verifiable, confirming, supportive, and establishing), making understanding and obtaining wisdom (hakam — educating and enlightening oneself to the point of comprehension) simple for the open-minded and receptive (pethy — easy for those who are receptive).